Hi Friends, here are some excerpts from a paper on Water Conservation from Knowldege Wharton.

Follow the link to read the complete paper: http://knowledge.wharton.upenn.edu/papers/download/031611_valuingwater.pdf


How Can Businesses Manage the Coming Scarcity?
Water is a paradoxical commodity: It seems free and plentiful, yet its supply is under tremendous strain. Use of fresh water has more than doubled over the past 50 years, and many fear that we are coming close to a frightening breaking point, a world where chronic water shortages for farmers, businesses and people is the norm. Some experts even see international conflict emerging over access to dwindling supplies. Recognizing these concerns, companies are undertaking major programs to realign their water use with core business and humanitarian interests. But while objectives like being “water neutral” and using “foot printing” — tracking the use of water throughout the supply chain — are ambitious, what is being done to achieve them? Are these goals realistic, and will they have enough impact?
In a Water-stressed World, Corporations Conserve
Global water requirements will outstrip supply in the years ahead. According to one report, a third of the world’s population will live where the deficit is greater than 50% just 20 years from now. Multinational corporations are taking notice of the compelling business and humanitarian reasons for having a proactive approach to water issues.
Water Neutrality: A Controversial Concept That Can Spark Innovation
With water use a potential deal breaker to doing business in certain regions, water intensive corporations are increasingly working to achieve “water neutrality” — the offsetting of water use through conservation, recycling, replenishment and community projects. Although criticized by some, such efforts are helping companies identify and reduce water use while educating the public about water scarcity.
Thirsty Power: Confronting the Energy-water Nexus 10
Water is a great hidden cost in energy generation. The reality of water-dependent energy means that any holistic impact analysis must take water consumption into account — and include impacts on water quality. Looking at water and energy together may in some cases solve two problems at once, experts say.
Water Foot printing: Getting Serious about Water Risks to Business 15
Companies face substantial business risks related to water and investors require them to be forthcoming. For companies concerned about these risks, water foot printing measuring fresh water used to produce a product over a full supply chain — is a logical next step. But foot printing can’t be undertaken simply to bolster a corporate image: How well companies succeed in managing water use will be the true measure of foot printing’s import
Valuing Water

The CFL bulb uses 75% less energy than a traditional incandescent.
Is the energy saved worth the risk of mercury exposure from a broken CFL?

Aquafina's bottles including the caps and labels are 100% recyclable.
How green can containers be when 80% of water bottles are not recycled?
Thought for the day

Japan sets its Air Conditioners’ temperature to 26 degrees Celsius or higher. Can we?

Posted by Varun Agarwal at 7:31 am 0 comments

If you were the last tree standing in the forest, how would you feel?

If you were the only human left on this planet how would you feel? You would feel miserable, dejected, lonely hopeless and helpless – wouldn’t you? Well that is exactly how I feel too. However, I feel something else too – I feel an immense sense of responsibility not only towards the continuity of my own race but also towards the continuity of yours. You see since I was born, I was conditioned to believe that my only purpose was to be of use to others. For what is man without the trees and the animals that survive on them; for whatever happens to us also happens to them – all things are interconnected. At such a time I would feel that burden even more.

I can see from my topmost branches that there is only clatter and noise in your cities. The mountains, streams and fields have been overshadowed by tall ugly buildings. There is only a cloud of smoke through which I feel the misery of your people. But perhaps because I am not a human, I do not understand your ways. This noise insults my ears and the sights bring tears to my core. This air that we all share is precious to you and me alike but I think you have become immune to its rotting smell as someone who has lived in decay is not affected by its stench.

When nature destroyed us in storms, it also rejuvenated us in spring. If rain and wind lashed our branches it also nourished us for the future. Our flowers bloomed in the heat of the sun even as the old leaves faded away. But every time one you your fellow humans mercilessly killed a brother or friend of mine, I cried. I cried not only for my own but what you were killing of yourself. When we are all slaughtered I wondered where would be all the deer and squirrels, where would be the sound and sights of the thickets, where would be the birds and beasts and above all where would YOU be? Perhaps if I was human I would understand who will be left to mourn for you.

Since I am not human, I feel responsible as the only tree to grow more branches and leaves to provide more oxygen to the creatures of this earth, to provide shade and shelter to the animals that laze beneath me, to the birds that rest and lay eggs on me and fruit to the smaller animals that climb on me. I recall how irritated I used to feel when a squirrel’s claws dug into a part of me that had no bark or when bird droppings fell on my clean leaves, but now I feel happy that another animal has survived because I am still there. When the drought would come I would dig my roots deeper so that I could get as much water for all the animals that depended on me. When floods would come I would hold on as strongly to the soil so that it would not get washed away so that man could still till the land. Perhaps if I was human I would understand that self-preservation and greed is what the struggle for survival is all about.

I often go into a reverie and recall the deeply exciting sounds and sights as the wind ruffled through us when we were so many that I could never count. The river-like flow of our tops was rendered so impressive and sublime as we danced it the music of the wind. Today when the wind blows, I am afraid it will uproot me, as there are no other roots intertwined in mine to support. I feel no exhilaration of swaying with my companions. There are no remarkable colors of the forest as the seasons change and the only shadows I can see are my own. The illusion of immortality I had as I surveyed the erstwhile ancient patriarchs has now given way to deep- rooted fear for mankind. When I look out for my parents and grandparents and don’t see them, I wish I would wilt and die with them – but I know that wherever they are they would have wished for me to go on living so that I could be of use to the very people who killed them. Isn’t that ironical? Perhaps if I was human I would know what dreams of the future the old men weave into their grandchildren for a better tomorrow.

If you were the last tree standing in the forest, how would you feel?

Posted by Varun Agarwal at 7:24 am 0 comments

Help retain our Earth for next generation like this: 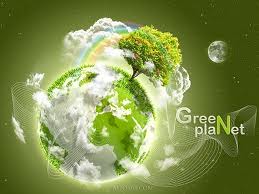 However, if we allow our earth to keep getting warm under the pressure of
Development. 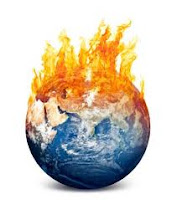 The day is not far when we will see our Earth burning and other natural calamities happening sooner than later.

Lets join hands together to give our next generation an Earth which we got if not better.
Tips to retain Green Earth 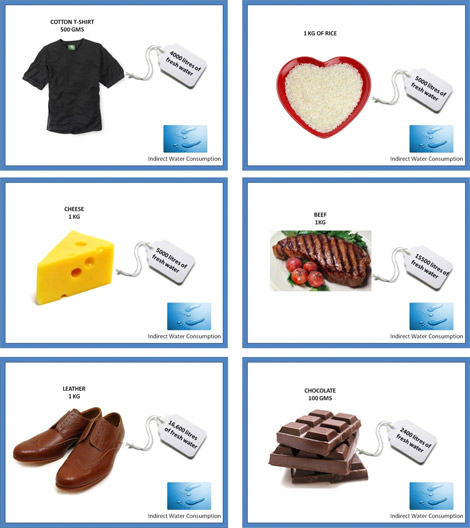 I got this idea of creating this blog – ‘ALL4H2O’ on issues of water footprint when I realized that a cotton t-shirt of 500 gms consumes more than 4000 liters of fresh water. Through this blog I urge you to contribute your, ideas and opinions on the subject  so that we can help spread this cause.

To explore the subject further, I have given few links in the end.

Posted by Varun Agarwal at 1:34 am 1 comments

Ground Water Depletion - Where are we headed? 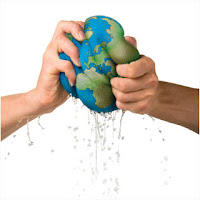 Freshwater is a scarce resource; its annual availability is limited and demand is growing, especially in Asia, Africa and North America. By 2025 these regions may face fresh water withdrawal, as high as 40% of total available fresh water in 1995 . With on-going growth of population and climate change on account of carbon emission/global warming, adversely affecting the rainfall pattern, coming era of water scarcity could adversely affect billions of people.

There are many spots in our country where serious water depletion or pollution takes place: rivers running dry, dropping lake and groundwater levels and endangered species because of contaminated water. India has 16% of the world’s population – but only 4% of the world’s fresh water sources. 90% of India’s rural water supply is from groundwater, which is reaching unsustainable levels of exploitation.

At this pace, I wonder what to talk of next generation, however, even our generation would find it difficult to survive.
Ground Water Depletion - Where are we headed?